Mini Metro is a game about designing a subway map for a growing city. Draw lines between stations and start your trains running. As new stations open, redraw your lines to keep them efficient. Decide where to use your limited resources. How long can you keep the city moving?

• Random city growth means each game is unique.
• Twenty real-world cities will test your planning skills.
• A variety of upgrades so you can tailor your network.
• Normal mode for quick scored games, Endless to relax, or Extreme for the ultimate challenge.
• Compete against the world every day in the Daily Challenge.
• Colorblind and night modes.
• Responsive soundtrack created by your metro system, engineered by Disasterpeace.


"If you love the city-planning aspect of Sim City but can't handle the pressure of playing god, then you may have just found your new favorite time-waster." - Ashley Feinberg, Gizmodo

"Take my word for it that a game about mass-transit system design can be a tense, white-knuckle thriller." - Owen Faraday, Pocket Tactics

Do you love Mini Metro app? Please share and improve it :)

I love Mini Metro and I have spent hours playing it. One thing I would really like to see, is a custom map creator so you can design the map you build on.

I was amazed when the update was released while I'm visiting Barcelona!

It’s not as good as their arcade version I got very bored very quickly. Don’t waste your money like I did.

Simply this game is addicting. I absolutely love tinkering with this game in my spare time. And fortunately, I’ve shared this game with most of the people I know who are now addicted. We will literally sit together playing the game and talking about what “strategy” we’re using in building our little towns on each week. It’s a lot more fun together. For the developers, I can not get the use of stop light down and was wondering if you would think about a one way road? I love getting the cars going in this little game and I’d like to see the effect of a one way road with getting cars by. Thank you!

I really don’t understand this developer. They have amazingly designed games that always suffer from terrible programming. They seem to have lazy programmers who do the bare minimum (while I’m sure make a Scotty-esque big deal out of it). They don’t even implement the most basic controls on “randomly” generated objects. When people complain about how bad it is, they put in an editor that allows you fix their mistakes, instead of them fixing them. It boggles the mind. Oh, and to use this ability to fix their poor programming, you have to play another game. I blame the management for this. Anyone can be fooled by people misrepresenting their credentials, especially early days in a company. But to not fix the situation after they’ve had games out as long as they have is simply dereliction of duty. They have released another game on the Arcade, and it is the same kind of nonsense: buildings appearing with no way to connect to them (or having to run ridiculous routes to do so), no checks on randomly generated objects, etc. You play these games for a while and say, “this is neat, it has potential”, and then the stupidity starts. After a while, you stop going back to it. I would say the same about the programmers, but it is obvious they have never played their own games ever. No programmer worth anything would play these games and not immediately start fixing all the basic faults that destroy the playability.

Clean simple yet intricate in strategy. A great game to wast time on

Hi i love the game and I'm overly obsessed with it i think it would be cool if u guys added in a branch feature where a new weekly reward option by the name of branch This feature allows to add a branch to a chosen line meaning it can have two different ends It would also be good if u guys added a statistics feature where u could view how many trains, carriages and average wait time in each line Thx for this great game i hope it gets better as we go kn

It’s an excellent puzzle game with a great art style and relaxing soundtrack.

When the sun goes outside,he puts on Chuck Norris glasses.

Love the look the feel and the replay ability. Well done. Worth the price

Challenging strategic game that’s fun to play. Starts off easy but becomes a chaotic in no time!

If you kick a stone in anger, you'll hurt your own foot. 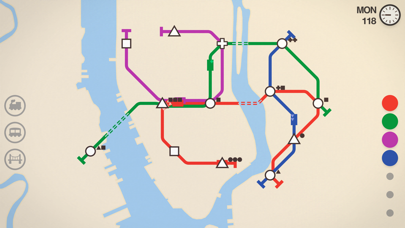 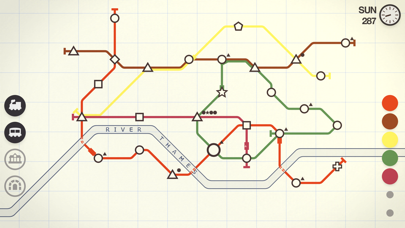 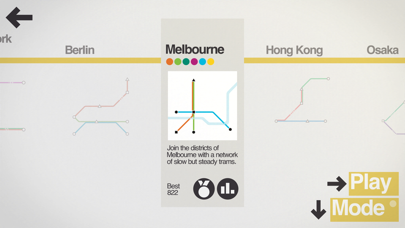 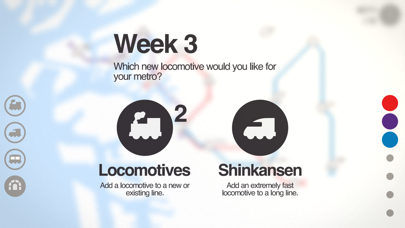 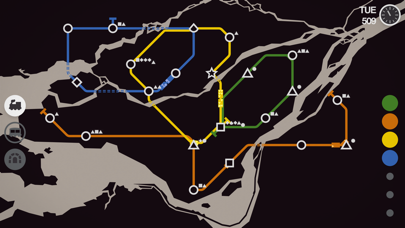 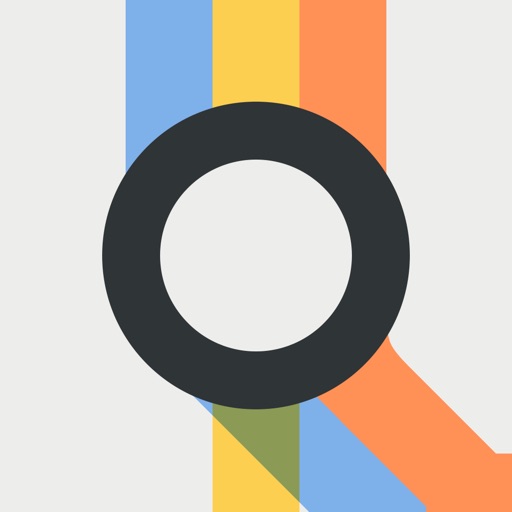