Do you love The Bill Simmons Podcast podcast? Please share and improve it :)

Forget those negative reviews. This is a free podcast discussing the latest in sports and pop culture. Simmons is hilarious and the addition of Russillo is absolute GOLD! Can’t get enough. If you’re complaining go somewhere else

Bill, there has been improvement but you still have moments of your incessant spit swallowing. Have you worked on this as well as learned how to use your cough button?

As soon as I found out Spotify paid $200 million to this Buffon I couldn’t unsubscribe from Spotify fast enough.Easily one of the worst and most overrated podcasts but I give Bill props for magically never remembering the 99% he gets wrong and never forgetting the 1% he gets right on any topic

your discussions on any sports are really great and engaging, you have a wealth of knowledge and insight when it comes to basketball, and i think your interviews with celebrities are alright for the most part. the only truly bad part of the show is when you have your friend jack o on to rant about politics with no voices to oppose him or argue any of his points. it wouldn’t be bad to have him discuss politics on your show, but to not have any person who will actually challenge his points makes it an unlistenable manifesto of one republican guy’s warped sense of reality; he rants about current events as if he’s an objective voice ‘just tellin’ it how it is’ when his points are completely subjective and certainly based on his personal beliefs, experiences and environment (which is the opposite of objective). disliking trump isn’t an automatic qualifier for somebody to be taken seriously, and i wish you would do better than just “mhm” and instigate one angry conservative man into giving his partisan takes on current events. not a great look to have that as your only attempt at a full-on political discussion.

Fantastic podcast, keep it up!

Bill Simmons is the single most likable sports personality there is. Keep doing this for a long time Bill!

I listen to every one of these podcasts, it’s a great mix of sports and pop culture plus great interviews and loveable returning characters

Russillo has been a great addition. Great chemistry with Bill.

I think bill at his best with either thoughtful people like Chuck klosterman, Malcolm gladwell, Nathan Hubbard, sports repodders, or his hilarious friends the cuz, jacko, and HOUSE!

Have enjoyed listening to the content they talk about all season. But as soon as COVID19 stopped the NBA the podcast turned into a Trump bashing platform and blame asigning left-wing mouthpiece. Just remember guys, that the majority of your listeners voted in Trump. Not wise to alienate them.

One of the best nba ones getting around

Chuck Norris can see his shadow and catch it- at night.

This is a good podcast.

Look up "Akil Mitchell" and "NZ Breakers" to see a basketball player losing his eyeball during a basketball game. It is possible!!!!

It's a top pod if you like Simmons and don't mind his Celtics homerism. He knows his NBA and isn't afraid to reach back into the vault (or look into the future as clairvoyant Bill) to prove a point. His 1 on 1 with Jimmy Butler was an instant classic.

No your fecking talking, give this man a show, infact give him the ringer Bill, two great bball minds, giving us what we want in April, which is NBA only.. period.. love you guys, keep it coming. Perth, Western Australia

Bill and his team (even his Dad) combined to bring you independent and intriguing insights into a basket of relatively unrelated subject matter you didn’t think you needed to know until you hear it. Except the NBA stuff, which literally everyone knew they needed to hear. Because basketball is life. Come on.

What a team of really funny people doing awesome podcasts, always in tune with what is going on around the major leagues - always part of my week! GB

It’s been a must listen podcast (whatever the iteration) since Simmons started podcasting in 2007. Even listening to the guy bringing up old tropes is a delight; never a dull moment. GB

If we have a positive mental attitude, then even when surrounded by hostility, we shall not lack inner peace. 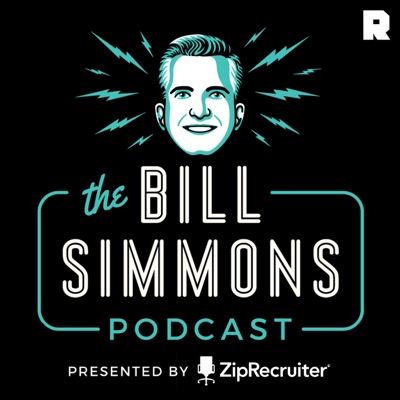