Do you love The Ben Shapiro Show podcast? Please share and improve it :)

Thanks Ben for all the great insight and wisdom. Clear understanding.

Unbelievable how you underestimate the intelligence of your listeners. Im done! Looks like Qanoners got you. Stop defending a president who “legally” LOST and peddle his BS w/o any evidence.

White chicks in the hood

Great info. Very good at explaining at terrible and evil the left is and the damage they are doing to our society and families.

A pseudo-intellectual with an ego the size of the state of California he loves to hate. I am an open-minded person who considers all points of view. I like to observe the conversations taking place across the spectrum of social and political issues. With Shapiro, all you will find is non-sensical virtue signalling and weak arguments that are almost as off-putting as the name calling and extremely dualistic conclusions he draws on near every subject. You, Mr. Shapiro, are a complete hack and charlatan.

Nonsense! Audience is a trump base who get their info from Facebook and Tucker Carlson (opinion, not journalism). Learn the difference and learn critical thinking. Unbelievable that that many Americans still support trump, the orange dolphin who clearly does not care how many of you die. He does not love you. He never will.

There are 3 types of reviewers: The 5 star - sensible conservative The 3 star - somewhat conservative but can’t stand ads The 1 star - woke flake

Pass by this podcast

An interesting & thought provoking podcast providing a balanced perspective on hot button topics. I like it! Suggestion: - Slow down - Ben talks too fast & it diminishes what he says. - Pause - Ben blends his commercials right into his speech. Take a pause between important thoughts, and commercials. Thank you.

I love the jokes, the impressions, the logic, mostly the ideas, but my brain can only take so much speed talking. I need a break. It’s like taking methamphetamines: you can get addicted. So don’t over do it

He's charismatic, he knows how to win a debate, he's... really incredibly biased. I tried to give this show a shot because I think one should at least listen to the arguments on both sides of an issue, but once you get past the witty "own the libs" monologues, there's precious little... thinking going on. Not something I'd recommend, but at least he's better than Steven Crowder.

Please save your time on a better listen. One to miss

Ben is an absolute legend. Beyond clever and extremely intelligent. I listen to him in awe and I am never bored. Nothing bad to say about this show

Facebook, not only a social networking site but also the shape your face takes when roundhouse kicked by Chuck Norris.

Uses slick wording to obscure facts and statistics and smoothly mixes in his own opinions so it sounds like his scathing spin is accurate. Uses his condescending tone of voice to make his listeners feel like they are stupid if they disagree. Very impressively uses his intelligence to fool the majority of his listeners. Good job Ben, one star for you.

I wish there was an in between 1/2 speed and 1 x. I had to check my speed settings as I thought Ben was speaking sped up. Nope, that’s just Ben. Great informative podcast.

I am an atheist but hang on his every word. Such an intelligent man who knows why he believes what he believes, whether it’s the popular view or not. So much respect

It’s amazing to hear some truth in the world today.

I’m a 14yr old boy in Australia who listens to this and I love it. I’m learning and shaping my worldview in something solid and forever true, cheers Ben

As an American living in England I do read/hear a lot of negative coverage of Trump and needed to find an alternative source of news regarding the upcoming election. An American friend here recommended this podcast and I have never looked back. Ben is extremely informative as well as entertaining and it is one hour of my day that is very well spent. He is fair and focused on the facts and that’s what I find the most refreshing compared to all the other “journalists” in MSM who never let facts get in the way of a good story about Trump. GB

Too many promos, ads, hawking. It gets really tiresome. Run the content you want to run for free, invite people to subscribe. Don’t run endless ads for steaks, guns and underwear. It’s horrible. GB

Ben Shapiro is someone I’ve enjoyed watching/listening to for a few months now. He is an intelligent, balanced mind and his humour is underrated in my opinion; I always get some bonus laughs when I tune in to the Ben Shapiro Show! Great show for Conservatives and a great show for Liberals who want to hear proper talking points on the opposite side of their political leaning. I recommend subscribing! GB

If you look over your left shoulder and it is saying to go this and your other shoulder is telling you to go the other way. Then just follow your heart and you will be OK. 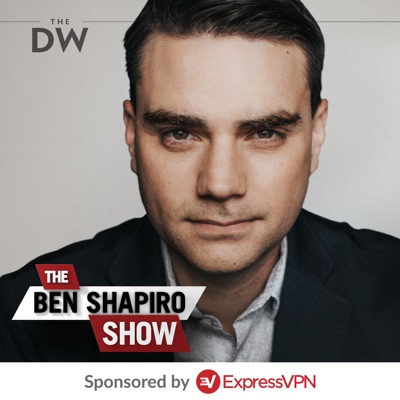