Do you love The Shrink Next Door podcast? Please share and improve it :)

The Shrink Next Door Comments

The Shrink Next Door Reviews

Absolutely fascinating and shocking story. Thank you Joe for telling this tale.

I will agree with other reviewers that the podcast moves a little slowly, but I thought it was still an incredible story and definitely worth a listen.

It’s hard to feel sorry for someone who allowed their therapists to take advantage of them. But, it really helps you see and develop sympathy for him. A licensed Dr. of the mind, against a normal dude.. He never had a shot.

This pod hit close to home for me as I was in a relationship with my doctor and ended up married to him and living through a nightmare! He took me for lots of mon but I am lucky to be alive and well away from him. This pod helped validate that this can happen to anyone.

A disturbing story of a shrink using all the tools of an abuser to control vulnerable patients. My heart goes out to his patients who were abused by this monster.

A cautionary tale about a person in a position of power and a vulnerable individual. You won’t be able to stop listening so interesting and shocking.

An awesome listen from episode one! I am totally hooked and can’t wait to listen to the next episode! 😁

I binged the whole thing and really enjoyed it. However, it reminds me a lot of Abducted in Plain Sight as the whole time I was frustrated and wondering how the hell Marty let things get as far as they did.

This podcast is well produced and interesting to listen to while I’m doing mundane housework (like the dishes). I’m only on episode 3 so far, but honestly, I don’t feel bad for Marty. He allowed all of this to happen to him. He isn’t an innocent bystander.

I think you are wrong. I guess we will have a lot of answers in the final episodes. But the story, to date, shows an extreme case of perverse narcissist. The like of Harvey Weinstein and so many others. You wonder how these people can live like normal people in our society, for so long, and even look successful, until they are uncovered. All clients of Ike had strengths that could be exploited to his benefit, while also having fundamental weaknesses that allowed them to be manipulated. I like the narrative. So strange, so gloomy, so mesmerizing. Can’t wait to know the end of the story.

Like the true crime stories How stupid was this guy to do this. Geez. This Marty guy was really had some screws loose

Spent a long road trip listing to this from start to finish. Loved it!

Salman Rushdie is afraid of the fatwa on him... but is utterly terrified that Chuck Norris is even slightly irked at him.

It was at times uncomfortable listening but thoroughly worthwhile. So sad to think a man’s life was so affected by the greed and ego of a health professional. I hope there is justice in the end.

This story is so crazy! It’s unbelievable! Definitely worth a listen

Stumbled across this podcast and glad I did. Fascinating story, well produced and riveting.

This is a well narrated and interesting story. I’m glad this story was told to expose evil Ike. He is so abusive and manipulative and prays on vulnerable people who came to him for help ... so disturbing. The manipulation and mind games make me cringe. It’s so awesome that Marty lived next door to a reporter and this story got told.

The nerve of this guy is second to none. Using his practice to manipulate people is as low as it gets. He’s on the radar of everyone now thanks to this brilliant podcast. Now his Jewish community should reject him and his fake values. He should be locked up and liable for white collar crime. What a piece of $#*%

I was baffled by the extended duration of the financial and indeed psychological abuse endured by Marty. His loneliness and isolation certainly were contributing factors to his vulnerability. But I am still wondering how on earth this abuse went on for as long as it did! As for the Dr Death podcast, I believe there is a system failure to protect the public and patient from such dangerous Drs. I was very disappointed to hear Ike is still practicing psychiatry. Definitely recommend listening to gain awareness and understanding of the signs of financial, psychological and emotional abuse to protect yourself and your loved ones. Thank you to the host and all the production team involved. GB

First don’t put professionals on a pedestal. Psychiatrists can be sick too and when at your most vulnerable never put your decisions in the hands of anyone else. You are prey for the opportunists and psychopaths when vulnerable. They’ll make you feel they care for and understand you more than anyone else and you reveal all your fears and worries which are used against you beware of the very charming and super confident. GB

Good production, was very intrigued to see where we were going but it didn’t have a satisfying conclusion. And the episodes since have all been a bit glad. I’m not sure if this is common but trailers advertising new shows are popping up. 3 in a row now. I have to unsubscribe. I’m not interested in an advertising tool. GB

The Shrink Next Door Wiki

The Shrink Next Door Podcast Images

The Shrink Next Door Similar Podcasts 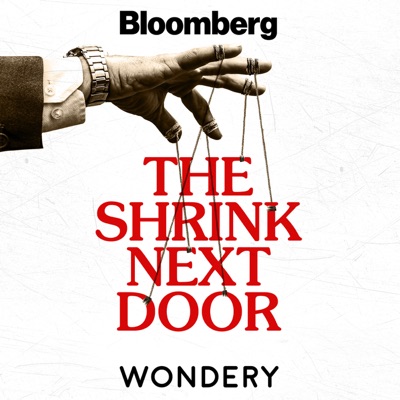