Do you love Stuff You Should Know podcast? Please share and improve it :)

Stuff You Should Know Comments

Stuff You Should Know Reviews

Started listening about 5 years ago. I really tried to stick with it but I stopped listening to more and more episodes. Over that time instead of getting better they just got worse. I just gave up. Mostly inaccurate information, gross mispronunciations, moronic behavior (lots of “poop” and “pee-pee talk) and they should keep their politics out of it. No one cares what you think.

these guys are smart and funny. but they have a crazy high percentage of ad to content. and the ads are the same annoying repetitive ads for yeeeeears. and then on top of that they get at least one factoid wrong in every show. i started back at the beginning in 08, and heard half of the episodes from this year. that is more than 100 episodes and im not going to listen to anymore. ive already unsubscribed.

I recall the woman killed was in Sacramento not San Francisco

This podcast is excellent for providing an introduction to a complex topic or a rich history. Unfortunately there are episodes when Josh is insufferable and arrogant. Chuck is funny and humble. Despite my personal grievances, I still recommend this to friends/family with kids in elementary & highschool.

Help me fall 😴 one con is they get off topic ALOT. Please make a podcast about dolphins

I’ve been listening to this podcast for almost half my life at this point. I started because I loved the Jim and Pam will they or won’t they dynamic Chuck and Josh had in the early years, and I stay for the incredibly warm and comforting discussions these two lovable guys share. Sometimes I go months without listening but I always seem to find my way back to these podcasts. I’ve lived an incredibly unstable decade or so, when I didn’t have a lot of money, but I did have a lot of time to wander in the streets, and I could always count on Chuck and Josh to teach me something new. Thank you for all that you do, and if you want more from them, they each have separate podcasts that are exceptional as well. I wish I could warmly shake your hands back in the before times when you were headed for a live show in Vancouver, but it looks like that is becoming less and less of an option. Luckily germs cannot travel through the internet, so I will have to be content with just listening and laughing. Stay safe and much love and gratitude.

I was a new listener to your show and I started listening some of the earlier segments. One of them was the Iran-Contra Affair. You guys started with Ronald Reagan which to me is a questionable start. You really need to start with Cuba in 1959 as the start of Communism in the Americas. Regardless, Nicaragua was not controlled by communism in the 1930s. We were occupied by the US in the late 20s. This gave rise to Augusto Sandino and the people he led to revolt against “American imperialism.” Shortly after the US was overthrown, the General Somoza (not a Sandinista, not a communist) seized power in a coup d’etat. His family controlled Nicaragua’s political future under rigged election processes until 1979 when guerrilla forces under Daniel Ortega overthrew the third Somoza in power. They called themselves Sandinistas after Augusto Sandino but the link between Augusto Sandino and the Sandinistas is not direct. What you guys said instead was that Nicaragua was under Sandinista rule in the 30s, and well into the 70s and 80s, which is not only inaccurate but hugely undermines the 20th century Cold War ideals to not let another country fall to communism and why the US would back foreign based guerrilla warfare instead of another US led war on foreign soil against communism.

We started listening to this 5 years ago with my 13 year old daughter when we drove in the car. The first few episodes were fine but we soon realized that she was starting to take everything Chuck and Josh said as bible truth. She was at an influential age and now at 18, she is a devoted fan and she believes magic mushrooms and marijuana are fine. I’m sure LSD will be next. The show is fine for adults who already have sound morals based on fact and life experience but maybe pass if you have teens listening who still need adults and role models who stand the moral high ground and promote a society based on principles of clean living and good judgement.

These guys got me hooked on podcasts. Keep up the good work!

I absolutely adore this podcast! The longer that you listen to it, the more you will fall in love with Josh and Chuck.

I feel like I know Josh and Chuck personally. I love how their personanities shine through in their episodes. The topics are always interesting even when I don't think it will be (except college football, I just couldn't get into that one). I think their tangents and pop culture jokes really make the show. I'm almost done listeing to the back catalogue and am afraid my days won't have enough Josh & Chuck in them with only three episodes being released each week. I'll probably go back and listen again. I often look up episodes on the website when my husband and I are talking about something and I say "Josh & Chuck told me about that". I'll pull up the episode and we'll listen to it together while doing projects around the house. Thanks guys, I really did need to know this stuff!!

I love SYSK. Josh and Chuck are fantastic hosts. They make the difficult or confusing topics understandable, the boring topics interesting and the fun topics memorable. I love to learn new information from them every week and then impart my knowledge on others, whether they want it or not.

I like the topics and consider myself liberal but as someone who has worked both in a trade (hey plumbers from other mothers) to now working in a white collar job, I find these guys so out of touch it’s insane. These guys need to pick up a shovel and have a go before they start talking about the “little guy” they are trying to protect or feel sorry for. Good topics guys just bring it a notch back to reality.

There are two types of people in the world: those who have been killed by Chuck Norris, and those who will be.

My favourite podcast ever ❤️

Love listening to these guys. Entertaining and informative

I love Josh and Chuck! Guaranteed to be engaged by the variety of interesting and well researched topics. My favourite show.

Josh and Chuck bounce off each other in a natural fun way enabling the listener to retain a lot of information to learn something new in the most fun way. I have learned so much since 2014 listening to this podcast and sometimes go back and listen to my favourite episodes. When they start talking about something off topic (which is always fun and light) it allows my brain to have a break of what I'm currently learning. Their dynamics and emotion in their voices allows the listener to stay engaged.

I started listening last year and the back catalogue will keep me busy for years but I love learning new things from Chuck and Josh. They’re chemistry is so fun to listen to.

Love this show. Will listen until I die.

Hi guys, love the show. I listen to it all the time. I’ve got to say something about the sheer repetition of advertising for your new book! It’s just constant! Yes you need to advertise, I know this. But dial it back some will you? I’ve just been working at my desk for the last two hours and I’ve heard that advert atleast ten times! GB

Been listening to podcasts for at least a decade now and this one is one of the best. Josh and Chuck feel like old friends. They are really easy to listen to and they cover some fascinating topics. I always feel like I’ve learned something and usually have a smile on my face whilst listening to them. GB

Listen to this on my commute to work, and love the conversational tone between josh and Chuck whilst learning about a new topic. Helps me through a stressful day!! GB

If I could reach up and hold a star for every time you've made me smile, the entire evening sky would be in the palm of my hand.

Stuff You Should Know Wiki

Stuff, stuffed, and stuffing may refer to: Physical matter An animal preserved by means of taxidermy.

Stuff You Should Know Podcast Images

Stuff You Should Know Similar Podcasts 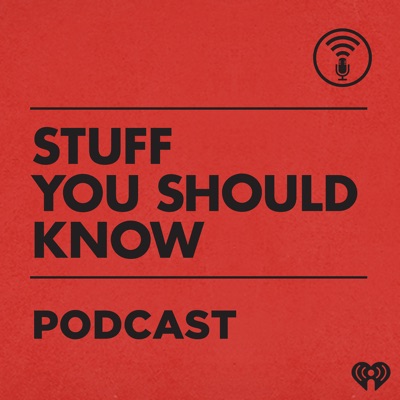