Five hundred years in the future there's a whole new frontier, and the crew of the Firefly-class spaceship, Serenity, is eager to stake a claim on the action. They'll take any job, legal or illegal, to keep fuel in the tanks and food on the table. But things get a bit more complicated after they take on a passenger wanted by the new totalitarian Alliance regime. Now they find themselves on the run, desperate to steer clear of Alliance ships and the flesh-eating Reavers who live on the fringes of space.

Do you love Firefly, The Complete Series tv serie? Please share and improve it :)

I really loved this to show I wish there was more seasons.

So good I actually named our daughter after one of the characters (we liked the name Inara - my wife had not actually seen the show at that point)!!! If only all TV was so enjoyable, I watched this when it was first made and can’t believe they axed it. Damn you Joss Whedon for creating such a great Tv show! No seriously thank you, I just wish firefly had as many seasons as Buffy!

I was so disappointed when the series was cancelled, it broke me in half. Firefly deserves so much more love.

Well done. The stories stay true to each other. Very well done...

this is an amazing show and i love it soo much. i’m so disappointed that they cancelled it cause it would have been a super big hit, but it’s still great anyway. all in all, i give it a 10/10. :)

My boyfriend recently introduced me to this show as we have similar taste in TV series and I’d never heard of it. We began watching and I was hooked. The stories, the character arcs and development. The chemistry of the actors. The wit and Sophistication of the humour. It’s a real winner. However, he gave me no indication of the length of the series and it wasn’t until watching the final episode I was told “that was it” ... What a waste of an incredible show, cast, idea. So progressive and courageous in its presentation of social issues. If you look up the circumstances by which this show was aired (e.g. episodes out of order), the politics between the production team and Fox studios, the show’s allocated airing during dead air time, and the quick judgement to cut the series despite knowledge that multiple hit series (i.e. Game of Thrones) don’t develop major ratings and support until approximately mid-season 2... this initially seven season masterpiece was just another wasted opportunity having been represented by the constant blundering and screw ups of Fox studios. Long live the Firefly.

I love this series

Oh man, this is the greatest show ever!!! Firefly gives us such heart and soul in to every episode I finished the series in less than a month it is absolutely perfect!!!❤️

I didn’t even watch this show until it was cancelled because of the lousy advertising they did for it, and because they took off Dark Angel to bring it in (which was my favorite show at the time) so I was mad. Then for lack of anything else to watch I started watching when they re-aired it. I was hooked immediately. The characters, the dialogue, the little bits of Chinese. Just everything was so good that I have watched those shows so many times I can tell you where mistakes were made. Still love it today. I have to say that one thing I am so glad that Joss Wheden did not put in this series like in so many other sci-fi is a myriad of aliens in all shapes and sizes. This makes it even more real to me. This was your best show EVER Joss, I think you think so too. OH and kudos for the music, beatuful & haunting, I have downloaded all of that also.

Chuck Norris can sen a text message from either his BlackBerry or one of his DingleBerries. 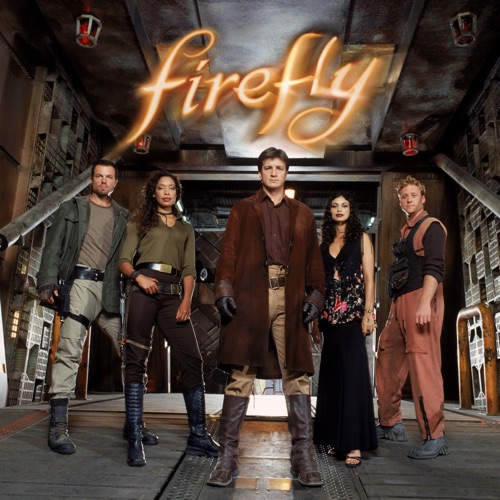