Betrayed by the Romans. Forced into slavery. Reborn as a Gladiator. The classic tale of the Republic’s most infamous rebel comes alive in the graphic and visceral new series, Spartacus: Blood and Sand. Torn from his homeland and the woman he loves, Spartacus is condemned to the brutal world of the arena where blood and death are primetime entertainment. But not all battles are fought upon the sands. Treachery, corruption, and the allure of sensual pleasures constantly test Spartacus. To survive, he must become more than a man. More than a gladiator. He must become a legend. Starring Australian actor Andy Whitfield (McLeod's Daughters) as Spartacus, Lucy Lawless (TV's Xena: Warrior Princess) as Lucretia, John Hannah (The Mummy) as Batiatus and Peter Mensah (300) as Doctore, this unique mix of live action, graphic novel effects, and brutal battle sequences makes Spartacus: Blood and Sand an epic event. Spartacus: Blood and Sand is produced by Starz Media with Executive Producers Rob Tapert (The Grudge, TV's Xena: Warrior Princess), Sam Raimi (Spider-Man, The Evil Dead), Joshua Donen (The Quick and the Dead), and Steven S. DeKnight (TV's Buffy the Vampire Slayer).

Do you love Spartacus: Blood and Sand, Season 1 tv serie? Please share and improve it :)

Do you have complete s*x and uncut scenes of Spartacus Season 1, Episode 9 which is Whore?

If you like blood boobies and a good story line this is it well worth the money!

I love this series! SO glad I stumbled across it on itunes. Once I started watching one show I was addicted and ended up cramming as many into an evening as I could. I had them all watched within a week! Well worth the money, the plot is just captivating, not to mention the eye candy for both the men and the women :)

There is but one word...wow

A good decision is based on knowledge and not on numbers.

@SpoofOtalia Well, she is a warrior in that Xena or w/e :o

I was hoping that this may be the calibre of Games of Thrones…however it was terrible. It's Days of our Lives meets, well something just as awful. Bad script, bad acting, poor sets. Giving it two stars was generous…give it a miss.

Why is there only season one, I need to download the other two before I go on holidays.... PLEASE!

is the red hair women the same as this blonde women?? are they both batiatus wives?? I really don't get it!!! PLEASE could someone help me understand this? xD

@808helenabcfan cuz for some reason they had hair dyers back then.

The best no words watch it

Wow, what a great show! First, fantastic acting all around. Andy (RIP) was sublime. The character of Spartacus could have just been any meathead, but he really brought subtlety and depth to the character. John Hanna was also epic as Batiatus, really clever and cunning. Lucy Lawless, still smoking hot, does a great job as his scheming wife. And the scene with Theokoles...easily movie quality. This is seriously one of the coolest fight scenes I've ever seen. The make-up, CGI, and actions sequences were perfect. My only one (tiny) criticism is that the "slaughter" in the finale felt a little mindless and over the top, and actually made me sympathize with the Romans. Part of the problem, though, was that most of the villains were so great that didn't want them to die! That's pretty much it though. S1 is one of the best shows to grace television.

in the begining.... was he asking about her hair or her necklace? why does her hair color change so often? 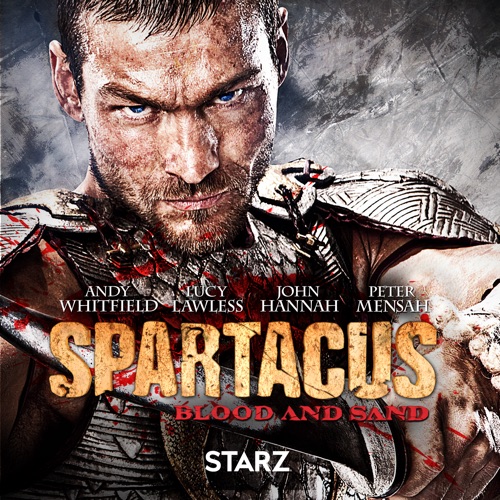