Nine-year-old Taylor McTuttle has reached a crossroads. Does he believe Santa Claus really knows who is naughty or nice? Does he even believe in Santa Claus anymore? An Elf's Story is the inspirational tale of Chippey, the young scout elf who is assigned by Santa to restore Taylor's belief in Christmas magic. When the boy breaks the number one Elf on the Shelf rule, Chippey loses his Christmas magic, the entire McTuttle family loses its scout elf, and both Taylor and Chippey lose their self-respect. Through the power of love and forgiveness, both of them learn the most important lesson of all: that true belief cannot be taught. A family holiday classic for generations to come, An Elf's Story is filled with fun, music and the timeless message that Christmas is something we carry in our hearts.

Do you love An Elf's Story tv serie? Please share and improve it :)

There is only one 26 minute show, NOT a season. This show (“season”) costs over 38 cents a minute. The saddest part is that this 26 minute show cost $7.99 (according to previous comments) a few years back, and everyone was concerned about that price for a 26 minute cartoon. Now they’ve raised the price to $9.99. It still says that you are paying for “season 1” — which is only ONE show.

Look at where it shows the one preview that you get to look at an it says, ONE EPISODE!!!!!!!

I love the movie

I kept checking for more episodes as it implied when I paid 9.99. After reading reviews I realize I also got ripped off. Very disheartening that a brand so loved by kids would take advantage of its following like this.

What a cute show. Wish it was listed as a movie and not a tv show. I was looking forward to more episodes. :)

Love that but I get that there’s better movies out there.

This is a really cute movie for young children that still believe. I do have a problem with the Brice when you can buy it at Locally for some times for less and have a copy of it

Have bought this few years ago, not only wasn’t cheap, now I can’t play it when I want it???? I really want my money back what a waist! You better off buying dvd for same or cheaper price

UIA’s ide our ffirst fresh if her life

The movie has a terrible plot. Overpriced, bad animation, and overall a crappy movie

The move is awesome . Love it and my kids want to watch it everyday

The show was pretty good but it was only 23 mins. I paid $10 for one show!! What about the season pass!

I love ❤️ this show elf on the shelf, it cool

I bought this 'series' thinking that there would be multiple episodes.....turns out that there's only 1 episode that is less than 25 minutes long. Calling this a series is ridiculously.

I really like it. I think it may teach kids not to touch the elf😁 and people who don’t like it I am asking do you have kids? yes or no? 😡😡😡😡😡😡😡😡😡😡😡😡😡😡.i am a kid and I love it so why say it is one or two stars and I have a elf at home and I don’t touch it because of this movie and please don’t argue with me because I will get so mad 😡 so just say “I have some complaints” not what they are.so I rate it 5 stars I just love it.

Great for families but crazy price. Description said “season” and have NO indication of length. C’mon Apple, be more forthcoming about what we’re getting.

I really like it.I think it may teach kids not to touch the elf 😁and people who don't like it I am asking do you have kids?yes or no?😡😡😡😡😡😡😡😡😡😡😡😡😡😡.I am a kid and I love it so why say it is one or two stars and I have a elf at home and I don't touch it because of this movie and please don't argue with me because I will get so mad 😡 so just say "I have some complaints" not what they are.so I rate it 5 stars I just love it.

This movie I highly recommend for familys!! Its such a great movie!! I love it!.

It states more episodes available, but there is only 1. Misleading yes, but my daughter still enjoyed it.

My mother was in town and she is using my Apple TV and of course, accidentally buys this show. Out of all the things she could accidentally buy…. it had to be this rip off. If this was priced at $1.99 or something then fine, I could live with it. Now my day is messed up because the thought of being ripped off is on my mind. To teach my mom a lesson, I’m going to lock her in a room with this garbage, and put it on repeat with MAX volume. lol. stupid video.

This has to be the most expensive "movie" I have ever purchased - one episode is all you get for your $9.99 purchase.... It was cute, but not for the money and very misleading since it's sold as a movie not an episode. If this was being distributed in the UK you could sue under the "trade descriptions" act I'm sure!

This is great episode but only one. Didn't like that I paid that for one episode

This is the best movie ever!! The graphics are out of this world!! A very good Christmas classic

I love this movie! It has a great lesson/moral to tell children.

Advertised like you get the complete season or movie but all you get is less then 26 minutes for ten bucks .... ripped off.....

$9.99 for 26 minutes? Sounds like a holiday scam. Avoid this title until more "episodes" are available for this "season". Otherwise great for elf owners, bad for their wallets

All I can say is lovely.

I'll get over it

I love this movie it's so sad because he lost his magic.From,Jaylene1231

The elf on the self is such a good movie

I thought it was the whole season!!

My son got an iTunes card for Christmas. He spent most of it on this 26 minute show, believing there were more episodes as stated! Cute movie, but RIP OFF!!!!

It says season - but in the end you only get only one episode (26 minutes) for the price of what you would usually pay for a full movie. It’s a nice little Christmas storie - but not worth that price.

I saw it was a TV show with episodes and was excited to watch them. I should of read the previous comments. I feel this should be under movies. A season is more then one episode. I feel pretty ripped off. One 28 min move should NOT be $9.99!!!!

This is an ad, masquerading as a show, for a toy that dies when a child touches it . . . .

My kids loved this movie, but I am shocked to have paid 9.99 for a 23 minute "TV show".. Totally false advertising that you're buying the "Season Pass".. What season pass?? Just one 23 minute show.

When I saw it i loved it

My children love it we watch it all the time on Christmas Eve your family will live it.You guys need to get it and watch it and it is good

My kids and I really love this as a holiday special. It really ties in to the whole Elf on the Shelf. That said, it's one 22 minute TV episode and $10 is way overpriced. It's the same thing with the Charlie Brown specials where they soak you $10 for one, but at least those are 45 minutes or so. I could see spending the $3 that most TV episodes cost, but $10 is a ripoff.

I rock and I'm cool

NOTHING AND I WANTED IT

That Is a awesome and a cute movie it's very inspiring!

We should have read previous comments about this only being 26 mins. We thought more episodes would be available for that price. feeling a bit ripped off just before xmas.

Completely false advertising. Not sure how one 26-minute show constitutes a full season of anything--and for $9.99? Please. I'm feeling very swindled.

Did I seriously just pay $9.99 for one episode? It says a full season but all I can watch it one special???

The stars are because it is a really good laugh. It is practically a really low budget musical. Save the music in animated films for Alan Menken ;/

I've seen this painfully camp, horribly overpriced and cliché 30-minuet toy commercial about a hundred times since last Christmas. I suggest hitting play and running out of the room... It's that bad!

how do we watch it? we can only watch the trailer and we bought the movie!

The first episode is good but... .How do I watch the second episode booooooooooooo😕😕😕😧😟🎅🎄

Show is 30 mins. Not full movie

Our kids (5,3,2) saw this last year, and wanted their own "elf". I bet they watch this show 50 times during the holiday season. They even ask to watch it off season. I must say, if you watch this, your kids are going to want the elf to go with it. From Thanksgiving to Christmas eve, the first words out of my kids mouth's is "Wheres the elf". It would be nice if they made new episodes of it either every year or after a few at least.

I wanted buy this movie on my apple account and still wont buy it yet. I have a deaf kid wants to see this and theres no captions!? Come on!

O watched it with my mama and we both loved it and we also have an actual elf from elf on the self go to hallmark or other stores like target to find it and Carry on a wonderful and loving family tradition mine started this year on thanksgiving ;) and I loved the movie it will be a tradition for me every year to watch it no matter how old I get

It's a good show

How come my iPod says that it can't play the movie

Good movie!!!! I watched it with my grandchildren. They have an Elf that came to them last Christmas. His name is Buddy. They told me about the story all through the movie.

I is a good one. It is good and fun. I think that you should see it. I met see you at that.

I loved the movie and I look forward to sharing it with generations to come.

I love this movie

BEST. MOVIE. EVER. I LOVE THIS. AN ELF IS SITTING ON MY LAP AS WE TYPE.

I've waited for an Elf on the Shelf Movie for a while, and this one is just perfect. It's great for families who have an Elf of their own, and the catchy music is great as well. I watched this all the time during the summer, and it never got old. Although this isn't a TV show, I'd really like to see another one. Coming from a teen, this heartwarming, half-hour special gets 5 stars!

The quality of the video is superb, and the story is sweet, music is catchy and when it comes on, my 15 month old granddaughter stops what she is doing and watches it from start to finish...highly recommend it..

This is so awsome

Where are the next episodes? The show is great for Elf on the shelf owners but the value isn't there until I see more

It was a great movie but Chippy was my fav.charecter in the movie because he helped Taylor do the right thing.

Great movie for those with an elf on a shelf in your household, and even if you don't.

it is cute little kids and adults love it and its all about the spirt of christmas!!!!:) 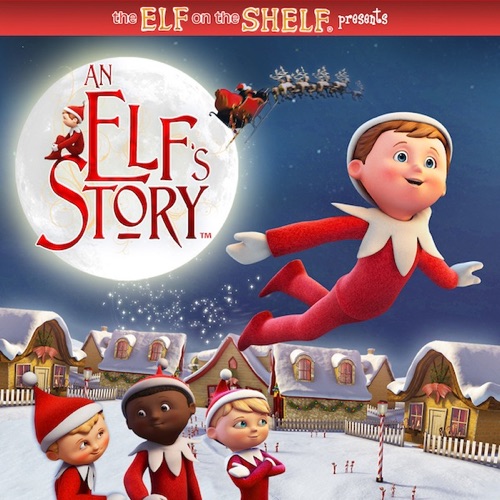