Bold and ever-capable trauma fellow Dr. Connor Rhodes (Colin Donnell) is the newest doctor on staff at Chicago Med. Dr. Will Halstead (Nick Gehlfuss), chief ER resident, is an Ivy League-trained trauma surgeon and brother of CPD’s Det. Jay Halstead (Jesse Lee Soffer). Halstead practiced medicine in New York for 10 years before returning to his Windy City roots and is the epitome of reliability, both in and out of the hospital. Dr. Daniel Charles (Oliver Platt), Med’s Chief of Psychiatry, possesses remarkable insight into his patients and is off-the-charts intelligent in all subjects but his own personal life. Sharon Goodwin (S. Epatha Merkerson), the venerable head of Chicago Med, expects the very best from her people as she balances the tremendous pressures of running the city’s largest hospital, and always with a sense of humanity that allows her doctors to provide the very best care possible. Dr. Natalie Manning (Torrey DeVitto) specializes in emergency pediatric medicine and is completely focused and dedicated to her patients, despite being in the third trimester of her pregnancy. Dr. Ethan Choi (Brian Tee) found his calling in medicine while serving as a Navy flight surgeon. Currently on away rotation, he is a tireless yet impulsive doctor who is well-versed in infectious diseases. Fourth-year medical student Dr. Sarah Reese (Rachel DiPillo) is a super proficient overachiever who has never struggled at anything academically, but who may soon find that, for the first time, she’s in over her head. April Sexton (Yaya DaCosta) is a smart, bold and intuitive ER nurse who is the lifeblood of the emergency room. She loves the action inside the hospital and is as loyal as they come. Together, they will confront Chicago’s most critical medical cases and challenging ethical dilemmas with courage, compassion and state-of-the-art treatment. Inspired by ripped-from-the-headlines cases, “Chicago Med” will weave cutting-edge medicine with the personal drama that comes with working in such a high-intensity environment.

Do you love Chicago Med, Season 1 tv serie? Please share and improve it :)

This is my favorite show of all time. I love it. Its not supposed to be 100% realistic. Its supposed to be a drama. And its a very good drama. Its not a documentary. Its a TV show and l hope there will be many more seasons to come. This should be the best show of 2018. GO CHICAGO MED!!!!!!! whoo😂😂😂😂😂😂

I think it is an interesting tv show, to much criticism

The show goes too far from reality. The physicians in the show would have several law suits for violation of patients rights at the least or their license to practice removed at most. Not to mention falsehoods about different patient population perceptions.

I just started watching this show and I LOVE IT! It's a great Medical Drama and it's definitely the best new series of the 2015-16 TV Season. Love it!

This is one of my all time favorite shows! I highly recommend buying it! I am hoping for a second season!

I love it all and all the Chicago Fire, med, and PD

If you don't like Chicago Fire and Chicago PD, or are just iffy about giving Chicago Med a try, I strongest suggest you do. Chicago Med is easily the best of the three. The plot is more grounded and realistic, the entire tone is less soapy and just good old-fashioned medical drama. It's not melodrama like Grey's Anatomy, or pulse-pounding like Code Black, it's closer to the overall tone of ER but still retains a bit of "Chicago trilogy" flavor and it's own distinct feeling. I was expecting something better than Fire and PD because Med has a different showrunning team, but I was still very pleasantly surprised at the overall quality of the first episode. Of course, that could always change but if the current creative team stays in place I believe Chicago Med will only get better.

As the third in the "Chicago" trilogy by Dick Wolf, and the crossover appearances of some of the cast members to both PD and Fire, the first episode brought no surprises. No extreme personalities, lots of working together, and enough drama to keep it interesting. What it did bring was a strong story and interesting characters that seem to have already found their groove. The concept of a trilogy works for me, and each could stand on its own, but the collective is a trio of good writing, strong characters with room to grow, and just enough humor to keep it from becoming cheesy or maudlin. So far, so good.

Why the item is not longer available? 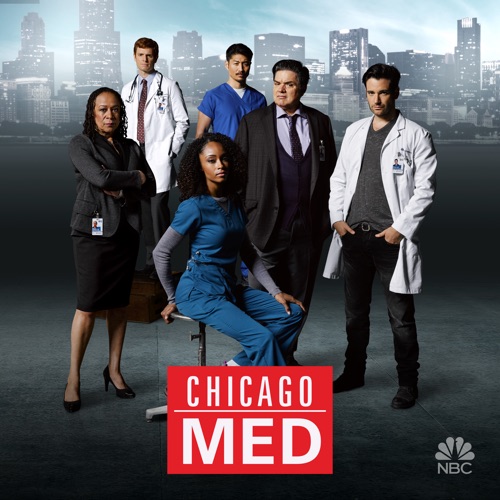