Basil Fawlty is a much put-upon, hard-working hotel manager whose life is plagued by dead guests, hotel inspectors and riff-raff. Of course his biggest headache is his 'little nest of vipers' - his nagging wife Sibyl. Together they run their hotel, Fawlty Towers, with a little help from the unflappable Polly, and Manuel, the trainee waiter from Barcelona with marginally more intelligence than a monkey.

Do you love Fawlty Towers, The Complete Series tv serie? Please share and improve it :)

It is not enough to have a good mind; the main thing is to use it well.

Those who say you can't unring a bell never met Chuck Norris.

Fawlty Towers is a British television sitcom written by John Cleese and Connie Booth and broadcast on BBC2 in 1975 and 1979. Two series of six episodes each were made. The show was ranked first on a list of the 100 Greatest British Television Programmes drawn up by the British Film Institute in 2000, and in 2019 it was named the "greatest ever British TV sitcom" by a panel of comedy experts compiled by the Radio Times.The series is set in Fawlty Towers, a fictional hotel in the seaside town of Torquay on the "English Riviera". The plots centre on the tense, rude and put-upon owner Basil Fawlty (Cleese), his bossy wife Sybil (Prunella Scales), the sensible chambermaid Polly (Booth) who often is the peacemaker and voice of reason, and the hapless and English-challenged Spanish waiter Manuel (Andrew Sachs), showing their attempts to run the hotel amidst farcical situations and an array of demanding and eccentric guests and tradespeople. The idea of the show came from Cleese after he stayed at the Gleneagles Hotel in Torquay, Devon in 1970 (along with the rest of the Monty Python troupe) where he encountered the eccentric hotel owner Donald Sinclair. Stuffy and snobbish, Sinclair treated guests as though they were a hindrance to his running of the hotel (a waitress who worked for him stated "it was as if he didn't want the guests to be there"). Sinclair was the inspiration for Cleese's character Basil Fawlty. In 1980, Cleese received the BAFTA for Best Entertainment Performance, and in a 2001 poll conducted by Channel 4 Basil Fawlty was ranked second on their list of the 100 Greatest TV Characters. The popularity of Fawlty Towers has endured, and it is often re-broadcast. The BBC profile for the series states, "the British sitcom by which all other British sitcoms must be judged, Fawlty Towers withstands multiple viewings, is eminently quotable ('don't mention the war'), and stands up to this day as a jewel in the BBC's comedy crown.". 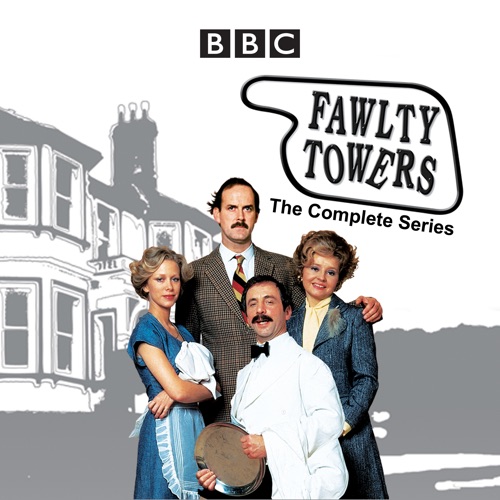