Spring breakers are getting murdered in Neptune, thereby decimating the seaside town’s lifeblood tourist industry. After Mars Investigations is hired by the parents of one of the victims to find their son’s killer, Veronica is drawn into an epic eight-episode mystery that pits the enclave’s wealthy elites, who would rather put an end to the month-long bacchanalia, against a working class that relies on the cash influx that comes with being the West Coast’s answer to Daytona Beach.

This is *not* the Veronica Mars we know and love. Veronica's character was unrecognizable; that gooey marshmallow center that is so particularly hers, was not there ---at all at times. So many aspects of the show were handled and written poorly, race (was the most stereotypical representation of a mexican cartel really necessary?), mental health, yet more rehashing of Veronica's old high school boyfriends (did we really need that?), infidelity, Keith's health problems magically fixed in a literal minute?, drug use, gun use...etc etc I won't even get into the finale which simply was the last nail in the coffin. While I believe Kristen Bell and Jason Dohring, as well as the rest of the cast, did wonders with the material given, nothing can salvage this season from the sloppy, careless writing throughout the season, but boy, did they drive it home with the last twenty minutes? Veronica Mars has never been a show driven by the mysteries. The mysteries of the week have always been predictable at best, laughable and almost silly at worst. We don't tune in every week to see the whodunit ---we tune in (or better yet, used to tune in) for Veronica AND her relationships; some of the best moments of the show have happened after the mystery is solved and Veronica came home to her dad. If anything this season showed us, is that Veronica isn't exactly PI of the year ---she's clever and badass, but she's never ever gone and solve a mystery properly on her own. The magic of the show is in those relationships ---the people around her that love/hate her...etc. not in Veronica alone... Never mind the relationship between Logan and Veronica deserved way more than what we ended up seeing ---they are flawed, strong, wonderful characters that deserved much more than what Rob Thomas & Co. chose to give them. To perpetuate the message that women can only be strong by continually be given trauma after trauma? I'm sorry, this is not the Veronica Mars I fell in love with so many years ago. This is most definitely not a Veronica Mars I want to continue watching. So sad and disappointing after all these years of supporting the show despite its flaws.

As a fan since the pilot was released (15 years), I am incredibly disappointed with this revival. The character of Veronica Mars has been completely demolished in the effort to turn the show into something new. The lack of continuity from previous seasons is astounding. Not to mention the use of a character from previous seasons, that stole and sold for profit child pornography, being used as a romantic partner for the female lead. I take personal offence to the show runner’s recent interviews, validating the awful and unnecessary major character death in the final minutes of the season, by saying “a 35 year old detective coming home to her boyfriend, makes me want to roll my eyes.” “Logan’s death gives Veronica the opportunity to be romantically available.” The fact that the entire show was torn apart because some guy decided the heroine of the show can’t be good at her job and have a relationship at the same time, is garbage. The fans made this season possible by funding the kickstarter movie. We were told the movie was a love letter to the fans, If that’s the case, season 4 was a F U to us. No one kept the fandom alive for the lacklustre mysteries, they’ve always been executed poorly and this season was no exception. Throwing away a completely unique idea and a built in fandom was a mistake and I will never watch another episode of Veronica Mars.

Veronica is BACK! I absolutely loved this season of Veronica Mars. It was captivating, creative and heart warming to see old characters again. Highly recommend if you loved the original 3 seasons.

Saying thank you is more than good manners. It is good spirituality.

What's wrong with S4 of Veronica Mars? I don't know...where to begin: -Let's get it out of the way: the death of Logan Echolls, one of the most integral and fascinating characters of the series since the beginning. Might have been acceptable if it had been written well, but the lazy and soap opera-ish way it was done made it meaningless. Even more infuriating are Rob Thomas' and Kristen Bell's comments on why it needed to be done (she needs to be sexually available to other men? Ew.). It's especially insulting because Logan was used extensively in promo both to get fans to donate to the Kickstarter movie in 2014 as well as for this season. -Veronica's characterization. Everything that made her a compelling character to root for is gone. In this season, she has regressed a great deal from when we last saw her in the second book, Mr. Kiss and Tell, with zero explanation. Every ounce of her humanity has been removed, as exhibited by her abusive actions towards Logan, her indifference to her best friend Wallace, and her casual racism towards old frenemy Weevil as well as other Latino characters. I also found it hard to believe that a daughter of an alcoholic who stole her college money to fuel said addiction as well as the victim of a rape as a result of being drugged at a party would suddenly be into casual drug use and at times excessive drinking. This version of her is also considerably dumbed down--at no point is she shown actually investigating or solving anything, most of that is done by other characters. Not to mention that she was previously shown to have a strict moral code against infidelity, but is now weighing cheating on Logan with Leo the pedo creep? (Side note, this marks the THIRD time in canon Veronica flirts with Leo before ultimately choosing Logan. And RT says he wants to leave the high school drama behind). Not helping matters was the fact that Kristen Bell's portrayal was severely lacking compared to older installments--she seemed to be playing original flavor Eleanor Shellstrop more than Veronica Mars. -The mystery: it sucked. Was repetitive and a slog. Not to mention that the bomb squad would definitely have checked her car? Also every fan predicted who the ultimate culprit would be based on casting alone. -Continuity issues out the wazoo: what year is this? The movie is supposed to take place at her 10 year high school reunion (2016), but here they say Keith's car accident took place in 2013? Veronica is suddenly 35 when she should be 32 in 2019? Logan is poor after driving an expensive BMW and being able to afford a last minute first class ticket in the movie? In the second book V is shown being tentatively forgiving to Weevil for taking the settlement from the sheriff's department but now she's angry at him? Would it kill the writers to at least remember what they've written before? In short, a disastrous season of television that wrecked the legacy of a once-beloved show.

I never write negative reviews. I am utterly irate regarding how this season ended. I cannot believe I just lost 8 hours of my life watching this. This season better be like some 80's soap opera... a dream sequence. I will never watch anything Mars related again if the ending isn't reversed somehow. Ridiculous. For anyone who has watched the show from the beginning, this is nauseating.

So disappointing that a show I’ve loved and supported for 15 years has turned to Trauma Porn storytelling. I do not recommend any diehard Veronica Mars fans watch what they’ve turned our formidable heroine into. This Veronica has lost her humanity and is not the snarky detective she once was. She’s even more bitter than her season three version and comes off as bitter and mean. She treats her friends horribly, makes fun of her boyfriends growth, and doesn’t seem to notice her dad is having serious memory issues. Plus, the big mystery is juvenile and should have been easily solved. In addition, the ending is just wrong. The heart of the show is gone and this (former) marshmallow is out.

Chuck Norris's Hummer gets 728 mpg. Every night, about 3:15, it fucks your Prius up the tailpipe and spanks it goodbye.

Veronica, Veronika, etc., may refer to:. 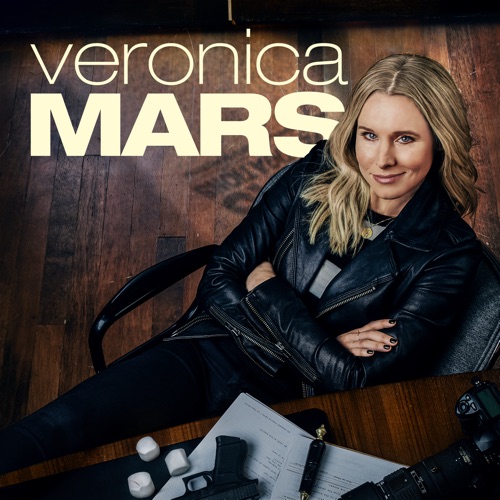